by BONews
in Disability, News
0

As persons with visual disabilities across the world commemorate the 2022 International White Cane and Safety Day on October 15, the Nigeria Association of the Blind (NAB) Lagos State Chapter has called on Gov. Babajide Sanwo-Olu to prioritise the full integration and active participation of Persons with Disabilities (PWDs) in policy processes.

The association made the call during a road walk to commemorate the global event in the Lekki-Ajah area of the state with the theme: Equality, Participation, and Justice. The group also worried that commitments of the state government to inclusive development might be derailed if PWDs and Disabled Persons Organisations (DPOs) are not intentionally engaged in policy and development conversations.

While speaking at the end of the walk, the NAB Lagos State Chairman, Barr. Lukman Abolarinwa Salami said there is a lot more to inclusive development than just a disability law and an office to manage disability affairs.

He said, “while we acknowledged the importance of the Lagos State Special Peoples Law as capable of advancing the rights of PWDs in Lagos, it is also important to reiterate the fact that the law itself can’t guarantee equality and justice if the Lagos State Office for Disability Affairs (LASODA) and other MDAs continue to work in silos and bereft of synergy as is currently the case.”

The lawyer also challenged special law enforcement agencies, including the Lagos State special task force on the environment, Lagos State traffic management authority, KAI, and other similar agency of the government in charge of ensuring the free flow of traffic and removal of hawkers on pedestrian/walkways and bridges to intensify their efforts at ensuring unhindered independent and safe movement of blind persons while navigating the road infrastructure in Lagos State.

“This is the justice we are talking about. Blind and visually impaired persons are suffering from the ban on commercial motorcycles on Lagos roads, and no one is talking about mitigating the effects,’ Salami lamented.

“And this is even more important than ever before because blind persons resident in the state now have to suffer more torments as they struggle to adjust to the new normal which is the restriction of commercial motorcycles on major roads,” Salami added.

The association also urged Gov. Sanwo-Olu to take immediate steps to reform LASODA in order to realise the integration and justice that PWDs agitate for in the state. “And this will remain impossible if LASODA is allowed to carry on without an efficient management and board as is the case presently,’ Gbenga Ogundare, the Public Relations Officer of the association stated.

Part of the reform, Ogundare said, “would be the realisation of a residential Lagos State-owned primary school for the Blind which LASODA has failed to agitate for over the years.”

The association also urged the Lagos State government to adopt the International White Cane and Safety Day as a government-sponsored event.

This year’s event was marked with the distribution of white canes it acquired, the distribution of branded T-shirts, and a charity awareness walk from Agufure motor park by Abraham Adesanya bus stop, Aja, to the Catholic Church of Transfiguration VGC where reception and entertainment followed. 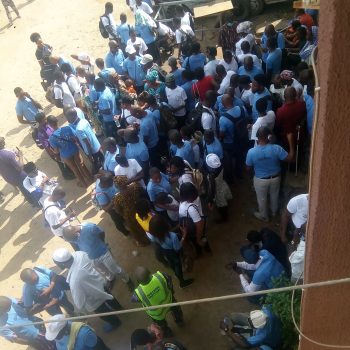