Nigeria Defence Headquarters Sets Up Committee To Investigate Killing Of Police Officers No ratings yet.

by Blessing Oladunjoye
in Crime, Military
0 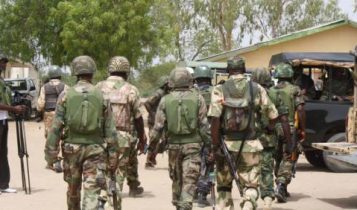 The Defence Headquarters Nigeria has set up a joint committee to investigate the killing of three police officers by some soldiers in Wukari, Taraba State on Tuesday.

The incidence has led to an altercation between the police and the Nigerian Army despite claims by the military that its troops mistook the police for kidnappers.

In a statement released on Friday, Colonel Nwachukwu, said the committee would be made up of seven officers and they are to commence work to unravel what led to the incident.

The committee, which would be headed by Rear Admiral I.T. Olaiya has representatives of the Nigerian Army, Nigerian Navy, Nigerian Air Force, the Nigeria Police, Department of State Service and the Defence Intelligence Agency.

The Nigerian Army claimed its troops of 93 Battalion Nigerian Army Takum, while responding to a distressed call to rescue a kidnapped victim exchanged fire with the suspected kidnappers along Ibi-Wukari Road in Taraba State.