The non-existence of a secondary school in Arepo Community of Ogun State has left students in the community with the option of travelling far distances to access education, which is having ripple effect on their health. In this report, Blessing Oladunjoye documents how the Education system in Arepo is in shambles despite the over 50BN allocation to education in the Ogun State 2022 budget.

Sustainable Development Goal 4 (SDG 4) aims to “ensure inclusive and equitable quality education and promote lifelong learning opportunities for all.” The first target of the Goal is that, “By 2030, ensure that all girls and boys complete free, equitable and quality primary and secondary education, leading to relevant and effective learning outcomes.” This can be a reality through the provision of 12 years of free, publicly-funded, inclusive, and equitable, quality primary and secondary education.

UNESCO had recommended state parties to earmark 15-20% of public expenditure to education, as a way to ensure access to quality education. While some countries are yet to meet the threshold, some are investing more in education.

The Ogun State government met the benchmark as its 2022 education budget represented 15% of the total budget. 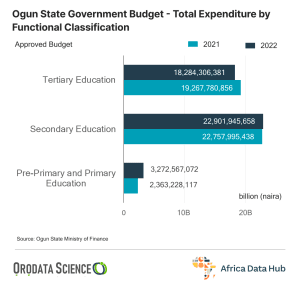 In December 2021, the state governor, Prince Dapo Abiodun signed the N350.7 billion 2022 budget and also adopted a 2022 Supplementary budget of N100.2 billion in August 2022. In the initial budget, N56.07 billion was allocated to the education sector. N529.1 million out of that was allocated to the maintenance of public schools; secondary education got N22.9 billion while primary education got N3.2illion under the category of total expenditure by functional classification. Obafemi-Owode Local Government Area where Arepo town is located received a budgetary allocation of N3.7 billion.

Despite the 15% budgetary allocation to education in Ogun state and over N3 billion to Obafemi-Owode in 2022, Arepo town, with a population of over 15,000 residents, has not significantly benefitted from public infrastructure and development. The town does not have a public secondary school, with the existing primary school in poor condition. It has no public healthcare facility and the community is replete with bad roads.

Residents of the community have continued to lament about the poor state of education, which has forced many of them to enrol children in private schools. Those that cannot afford the fees charged by private schools have to contend with sending their wards to schools in communities several kilometers away.  Some of the students have to commute through the busy Lagos-Ibadan Expressway.

The Community Development Committee Chairman, Mr. Kazeem Ganiyu, who spoke on behalf of Oba Solomon Atanda Oyebi the King of Arepo, said the poor educational infrastructure in Arepo is a major pain in the neck for the residents as they are left with options of enrolling their children in private facilities, despite the economic hardship experienced by some parents.

Ganiyu said students have to travel long distances on a daily basis, to access quality education, which ought to be within their beck and call.

“The previous administration about 8 years ago promised to build a secondary school in Arepo, but nothing has been done to that effect, and not all of us, especially the core indigenes can afford to enroll students in private schools,” the community leader said. 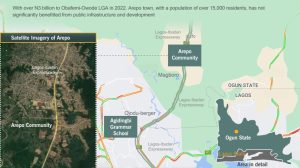 “Some of these students go to schools in Ibafo which is highly risky because they have to cross the expressway. My child is attending a public school (boarding) in Odongbolu because I cannot afford to enroll him in a private school here and I can’t bear the financial and emotional burden of exposing my child to daily travel from Arepo to Ibafo everyday. If there were to be a public school in Arepo, I wouldn’t have had to enroll my child in such a far distance”.

Ogundare walks from her house to the bus stop, takes a vehicle to Berger, and walks to school every morning, the same routine she maintains when returning home.

She explained that by the time she gets to school, she is already tired and worried about the journey back home later in the evening. However, she thinks her situation is better than other students who have to walk to Agidingbi from Berger or to Magboro from Arepo.

“We all look forward to public holidays because they are opportunities for us to rest. It takes a lot of commitment from our parents and ourselves to remain in school because most times you wonder if the stress is worth it,” she said.

“It is also worse now that they are fixing the Kara road which causes huge traffic every morning when going to school, and that means we have to be on the road as early as 6.00 am most times just to beat the traffic,” she added.

The Women Leader of Arepo CDC, Ibinabo Dixon, noted that the non-existence of public secondary schools has posed a threat to some public primary school leavers.

“Arepo is a growing community, some of the women are low-income earners you know, struggling to make ends meet,” Dixon said.

Mrs. Kudirat Asaolu-Johnson, a market women leader in the community, said the private school owners are leveraging the non-existence of secondary schools to inflate fees thereby making it difficult for parents to afford it.

“My daughter, Zaynab leaves the house at the latest 6.30 am so she could walk to the bus stop, take a vehicle, and beat the traffic so she can resume school as early as possible,” said Mrs. Khadijat Jimoh, a photographer whose 17-year-old daughter goes to school in Ibafo, a town about 6.5 kilometers away.  “By the time she returns in the evening, she is already tired due to the long walk from the junction, and the routine continues on a weekly basis.”

According to UNESCO, Nigeria has an estimated 20.2 million children and youth out of school as of September 2022. 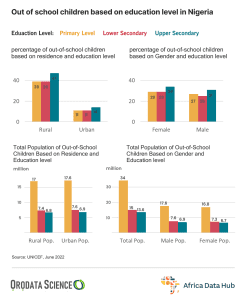 A major factor contributing to the increase in out-of-school children could be linked to the non-existence of publicly funded schools in some communities across Nigeria.

For instance, Mrs. Funto Durojaiye (not real name) a hairdresser in Arepo said when parents cannot afford to send their children to private schools, the children would be forced to stay at home or learn a trade.

Durojaiye believes that learning a trade without basic education, at least up to the secondary level, would put such a child at a disadvantage later in the future. Travelling long distances to school is a risky venture for students, she said.

“Which parent would risk the life of her child just to access education and commute through the busy Lagos-Ibadan Expressway to go to school either in Ibafo, Magboro, Berger or Agindigbi? Even the transport fare to and fro on a daily basis is exorbitant,” she said.

Corroborating her, Alhaja Adijatu Lamid, an elderly petty trader, said many children in Arepo are roaming about because they have been forced to stay at home instead of going to school in farther locations like Akute, Ketu, and Agidingbi.

“Not all of us have the same financial capacity to enrol our children in the private schools here,” Alhaja Lamid said.

“There are instances where parents have had their children stay at home because of the risk they could be exposed to while travelling to school, the daily transportation fare and when that becomes persistent, such children would be made to stay at home and you see them roaming about.”

She said many school children look tired and miserable when returning from school every day.

Mrs. Victoria Kafaru, the proprietress of Future Edge Schools, Arepo, said the population of school-aged children in Arepo has not translated to the enrolment of students in private schools, stressing many parents cannot afford to send their children there.

“My school is one of the cheapest in Arepo but we still have low patronage. There are some children in my school that have completed their primary education but their parents cannot afford to send them to private secondary schools. Some cannot even send their children to public secondary schools because it is not totally free and it is far from Arepo. This shows that all fingers are not equal.”

Education is a right that every child is entitled to but the situation is the opposite in Arepo and residents have appealed to the Ogun State Government to consider the community and provide educational facilities for the children.

“If the government decides to bring Public schools here, I’m sure the indigenes would send their children there because it is not easy sending children to schools in Magboro or Ibafo, even with increased insecurity,” she added.

Alhaja Lamidnoted that education is important and that the government should prioritize improving the status of education in Arepo.

She said “the only primary school in the community is in poor condition and practically non-existence, it would be good for the government to come to our rescue to fix the primary school with necessary amenities and build a secondary school as well.”

“If a child is educated, such child would be useful to himself/herself, the parents and the society at large,” she added.

Dixon, the Arepo CDC women leader stressed that “school education plays a huge role in our lives and every child reserves the right to the structured education system. So we are calling on the Ogun state government to come to the rescue of these less privileged children by establishing a secondary school. A public secondary school in Arepo would go a long way to alleviate the constraints that some parents are facing due to lack of funds.”

Chief Liadi Ogundipe, the Babaloja of Arepo also corroborated that the Ogun State Government and education stakeholders should consider the importance of education and set up secondary schools in the community while equipping the existing primary school.

He noted that “When the schools are set up, our children will have access and benefit. We’re old but we want the best for our children, they are our future and we must invest in them.”

Mama Nana said it would be a great delight for her if there could be a public secondary school in Arepo because it would benefit so many children and prevent the dangers school students are exposed to on a daily basis.

This report is done with support from the African Data Hub.