Dana Air Charges N4,500 As Service Fee For Wheelchair Usage No ratings yet.

by BONews
in News
0

A Dana Airline passenger travelling from Owerri to Lagos, Mr. Ogungbemi Toyin (Pseudonym) has been made to pay the sum of four thousand five hundred naira, N4,500 to enable him use the wheelchair facility belonging to Dana Air.

Mr. Toyin, a frail elderly man, who was travelling on Dana Air 9J332 Owerri to Lagos on Tuesday, January 19th, was required to pay before he could use the wheelchair from the lobby to the airplane. 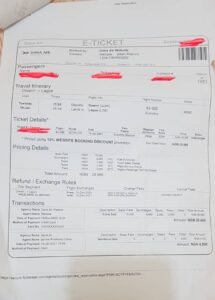 Mr. Toyin, who was not prepared to pay any fee at the airport, was left to the mercy of other passenger who paid the requested amount, to prevent the elderly man from walking such distance.

The passenger who paid Mr Toyin’s fee lamented about any policy or practice that would subject passengers to pay for using a wheelchair facility, that can be reused by others.

Narrating the incident, she said, “when asked to pay, the elderly man brought N500 from his pocket, but the guy said it was N4, 500.

“I just understood that maybe the man did not have the money, I didn’t want them to embarrass him so I paid for him and asked if I could have the receipt, and they gave me.

“I asked the manager of DANA Air if they truly charge for the wheelchair and he said yes.”

She believes that such practice is a form of exploiting the passenger.

Confirming the incident, Mr. Kingsley, Dana Air supervisor in Owerri, disclosed that the standard practice for anyone who wants to use the wheelchair facility belonging to Dana Air is to pay the sum of 4,500 naira.

Explaining that the fee was not to exploit any passenger, Kingsley said “a receipt was issued for the payment, adding that, “that’s the practise for now.”