World Children’s Day – Aisha Saleh and Possibilities for the Nigerian Child No ratings yet.

by BONews
in Features
0

November 20 is marked annually as World Children’s Day, the anniversary of adoption of the Convention on the Rights of the Child by the United Nations. It is also a day to create awareness among children, highlight issues around children’s rights and welfare globally.

Amidst the challenges that we face as a nation, the day gives us an opportunity to reflect on the possibilities for the Nigerian child, aka Naija pikin, and to celebrate them.

Aisha Saleh personifies the reality that every child everywhere no matter the circumstances of their birth possesses exceptional potentials and can be a game changer at any level worldwide. What stands before them and greatness mostly is the availability or otherwise of opportunities. Access. Access.

Recently, Aisha who will clock 16 next month, was appointed a Climate Adviser to the United Kingdom-based international child’s rights group, Child Rights International Network (CRIN). She is one of 15 young persons from across the world so appointed. Earlier in the year, she also was selected as one of two children from Nigeria to be featured in ‘Know Your Right’, a soon-to-be-released book written by Amnesty International in collaboration with American actress/celebrity, Angelina Jolie and Professor Geraldine Van Bueren QC, one of the original drafters of the UN Convention on the Rights of the Child. It will feature child activists from across the world. Aisha is also a co-presenter of CEE-HOPE’s maiden children podcast/radio show, ‘Children and COVID-19’ which highlights the often unspoken about impacts of the global pandemic on young people, and presented in their own voices.

Miss Saleh who lost her mother, Zainab at a much younger age, lives with her grandmother after whom she was named, with her only sibling Mohammed, in Monkey Village, Opebi, one of Lagos’ most impoverished informal communities. Owing to her exceptional academic brilliance, she spent four rather than six years at the Opebi Primary School, Lagos, as she earned two double promotions in school. From her first year in primary school to her current SSS 1 class at the Opebi Senior Grammar School, she has consistently topped her class. Aisha, a polyglot, speaks five languages (English, Yoruba, Hausa, Arabic and Egun language), and all five from at about age eight. 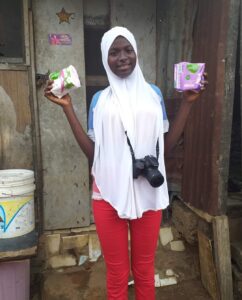 Her leadership qualities have also been glaring as she currently serves as coordinator of our Mal and Carol ICT Centre/Youth Hub in her community, is the community librarian and leader of the Girls-Go-for-Greatness (Triple) girl empowerment club in her community, rallying other children and young persons for various activities and causes eg, discouraging parents in her community from getting their daughters into early marriages, and promoting girl education etc. Aisha, a jolly good girl with her trademark gap-toothed smiles, is also the maiden ambassador for our period poverty campaign, the Give-a-Girl-a-Pad project, featuring in our short documentary on same topic, ‘Give Us This Day Our Monthly Pads’ earlier in the year. 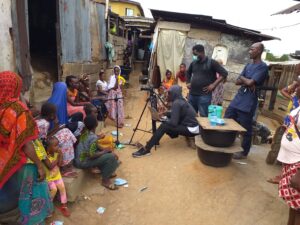 Aisha came to limelight last year when she lost a major opportunity to represent Nigeria at the 30th Anniversary celebration of the UN’s Child Rights Convention slated for Geneva, Switzerland November 20, 2019, exactly a year ago. The conference brought together star kids, child activists, celebrities, politicians and other stakeholders from across the world. But officials at the Nigerian Immigration office at Ikoyi, Lagos refused to issue her an international passport as to them poor Aisha, accompanied by her poor dad, Saleh Mohammed, didn’t cut the picture of ones who should be traveling to Switzerland much less being a representative of Nigeria. Even after the presentation of valid documents from their host in Geneva, the sponsor, Amnesty International (whose staff and her dad were to accompany her on the trip), hotel booking, attestation from her school (where her status as a child prodigy is well known), proof of her accomplishments from CEE-HOPE etc, the officials blatantly refused, rather, they set up an ‘investigative committee for a potential child trafficking case’. After much media outrage and intervention from higher authorities, she was issued passport in one day, after three long weeks, but it was too late to obtain a Swiss visa and she missed the golden opportunity. That injustice remains unaddressed by the relevant authorities as we speak. 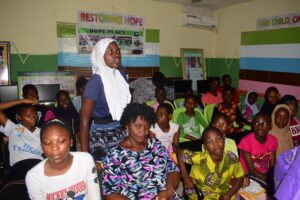 But Aisha has since wiped her tears and moved on, comforting herself with the faith that more good things would come her way. We are happy that a year after that disappointment, good things are indeed trailing her young and promising life.

Our very deep appreciations go to all who put in a word or two for Aisha and who showed her solidarity and great generosity. Thank you. 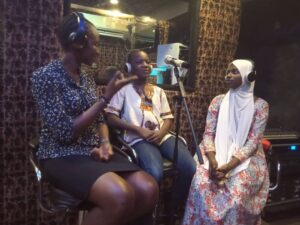 Aisha Saleh mirrors the abundance of talents and of potentials domiciled among the young people in the populous, striving and often forgotten poor communities across Nigeria.

Congrats, Aisha, congrats, our striving youngsters. The best is yet to come!