After Surviving 3 Surgeries, 21 Year Old Daniel Was Duped While Seeking Funds To Cure Martison’s Diseases No ratings yet.

Jimoh Daniel, a 21-year-old man has been allegedly duped by a travel agent, simply identified as Johnson, while trying to source funds to enable him to relocate outside Nigeria, as part of the process to help him cure Martison’s diseases.

Daniel, in an interview with BONews Service, disclosed that he was duped of the sum of one hundred thousand, two hundred naira, which was payment for a visa fee to Australia, to enable him to recover from the tropical disease.

Daniel had in 2016, been diagnosed with Martinson’s disease known as RHINOENTOMOPHTHOROMYCOSIS which has been causing the swelling of the cheeks and upper lip.

“During the cause of presenting me to the department of OTO-RHINO-LARYNGOLOGY at the University College Hospital, UCH-Ibadan, the swelling was already diffuse, involving the right side of my face, most especially the upper lip, the nasolabial fold area, and nasal pyramid.

“At that moment it was not tender and there was no differential warmth. As times go on, the facial swelling was noticed to be craggy hard, and there was total blockage of the right nasal cavity with the swelling and deviation of the nasal septum to the contralateral side,” Daniel narrated.

Explaining his predicament since he was first diagnosed with Martison’s diseases in 2016, Daniel revealed that the report of the computed tomography scan of the Paranasal Sinuses that was presented to him at UCH-Ibadan showed “an Isodense Lesion involving the soft tissue of the cheek and upper lip, right nasal cavity, maxillary antrum, ethmoid, and nasopharynx.”

“I was also examined under general anesthesia of the nose and nasopharynx. The operative finding was widespread craggy hard swelling of the soft tissue of the right side of the face and within the nasal cavity and nasopharynx but no definite mass was seen at this stage,” Daniel explained.

To cure him, Daniel, on September 17, 2019, had his first surgery at UCH, in other to bring me back to the normal state.

“An incision biopsy of the interior portion of the right inferior turbinate and Sublabial tissue was done, after which I was subjected to some medication with an appreciable reduction in facial swelling.

“By this time, I had sustained clinical improvement until October 2017 when the facial swelling reoccurred.

“On November 3, 2017, I also had a repeat sublabial biopsy and right intranasal antrostomy plus antral biopsy. The tissue histological diagnosis was still acute on chronic inflammation, as disclosed by the doctor.

“I had the third surgery on Tracheotomy for upper airway stabilization at UCH on March 18, 2020, while the swelling remained static in growth which subjected me to routine follow up in the ENT clinic.”

Daniel, after the third surgery at UCH, which proved abortive, was referred to seek proper attention in India

“I ought to have gone to India even before the third surgery at UCH, but I don’t have such resources. It took me almost 2 years to secure the funds to go to India.

“Within the period of saving the money, my condition had gotten worst, which I have to had a tracheotomy surgery to save my life early last year when it was difficult for me to breathe through my nose,” he explained.

In October 2020, he left for India as advised by his doctor at the university college hospital which he was told he will be undergoing another surgery after the last three he had in Nigeria at the UCH.

“I was told the surgery will be a serious one because it has to go through my forehead to get to my nose and throat. In no time I gave them my consent because all this while I was alone, and in pains.”

He had left for India all by himself due to financial constraint that does not give room to another person to follow him.

Daniel was first evaluated by physicians in Apollo Hospital in Indian on October 30, 2020, while his previous treatment was traced along with radiological imaging which was recorded.

“During the examination carried out on October 30, 2020, the physicians noted I had the tracheostomy tube in stu with facial swelling since 2016, which I attest to. The swellings on the face were also said to be limited around the forehead, under the right eye, over the dorsum of nose involving both the Alae extending inferiority over the upper lip.”

After much deliberation on these, I was admitted on November 7, 2020, after a pre-anesthetic check-up and physician clearance; underwent the following procedure; Laryngotracheobronchial examination with left supraglottic incisional biopsy of soft tissue mass with excisional biopsy of firm mass over the glabella (forehead) under general anesthesia.

“I was discharged the following day and also followed up regularly to monitor my healing.

“On November 14, 2020, and November 17, 2020, I was placed on different tablets which I have to take with lunch, and after dinner respectively, with advice to use proper Sunscreen while exposed to sunlight. On the same day, the tracheostomy tube was occluded and the Nasotracheal airway was found to be stable with adequate vocalization, Daniel revealed this to the reporter.

On November 23, 2020, the awaited HPE reports were made available which reported deep mycotic infection of both the Left Supraglottic specimen and the tissue from the forehead. PAS Stain for both the specimens was strongly positive for fungal spores and hyphae. Following the confirmation, definitive treatment was started, this was contained in a report written, and signed by the physician at the Apollo Hospital, Indian.

“In between, I was shown some techniques on how to go about the preparation of some medication administered to me, so that I can do it on my own. Some treatment was initiated on November 25, 2020, while I was placed on a particular Tablet to be taken immediately after breakfast,” Daniel explained.

On November 28, 2020, Complete Blood counts, Liver function Test, Kidney Function Test, Serum Electrolytes along Thyroid profile were done for a baseline evaluation, which was reported well within the normal range.

On December 9, 2020, I managed to remove my tracheostomy tube after which I was evaluated by the physicians. The stoma was occluded after the tube removal to check airway patency. There were no emergent airway issues noted thus stoma was left occluded, he said.

He also noted that Fibre-optic Laryngoscopy which was done on December 12, 2020, revealed no left supra-glottic compromise. The glottic airway was noted to be adequate which was decided not to continue with the tracheostomy tube.

In other to manage his health status Daniel was asked to maintain a well-balanced diet, stay well hydrated, complete blood count, liver function test, kidney function test, thyroid profile after 8 weeks and report which next test plan was to be planned based on a clinical evaluation to seek medical attention locally in cases of emergency or respiratory distress, video consultation every two weeks with prior appointment, and photo documentation (five profile) was requested for academic purposes.

After placing him on all these medications, he was discharged to return to Nigeria after which he was asked to contact them regarding the treatment and any feedback whenever necessary.

How Daniel Was Duped When He Hoped For A Better Life

“The swelling reduced before leaving India, but the medication stopped working when I got to Nigeria without any progress,” he stated.

After discussing the situation of things with my doctors as required of them, I was asked to leave Nigeria because I was suffering from a tropical disease which requires that I leave the shores of the country

Daniel who was keen to get his health back quickly informed his parents about the new development while he also started engaging in menial jobs to enable him to secure funds to relocate outside the country, thereby get healed permanently.

“I had to do labour work in sites and it was easier to get that because my father is a steel construction welder.

“After raising some funds from the labour work, I met a travel agent, Mr. Johnson Umar Mustapha, a Yoruba man who resides in Nasarawa and claims to work at Andokari Global Travel Agency.

“Mr. Johnson who is also a Yoruba man agreed that he can help me to process and secure an Australian work visa so that I can be able to work in other to continue my medical treatment and also recover since I’ve been told I must relocate outside Nigeria to recover fully.

“My mother also spoke with Mr. Johnson and he assured us that everything would be sorted.

“Mr. Johnson asked us to pay a total of six hundred thousand naira but mentioned that we should pay one hundred and fifty thousand, two hundred naira for the first tranche, and once the visa is ready and confirmed, we will pay the balance.

“My mum planned to sell some of her belongings so we can provide the balance when the visa is out. With pain and agony, we struggled to pay the sum of one hundred and fifty thousand, two hundred naira to his Zenith account in February 2021 and he issued us the receipt,” Daniel explained.

Continuing, Daniel said, “after the payment was made, Mr. Johnson sent me a ‘Labour Impact Market Assessment’ (LIMA) form so I could fill but I told him it looks fake, and it was at that point he opened up that all that he has been doing was not genuine. 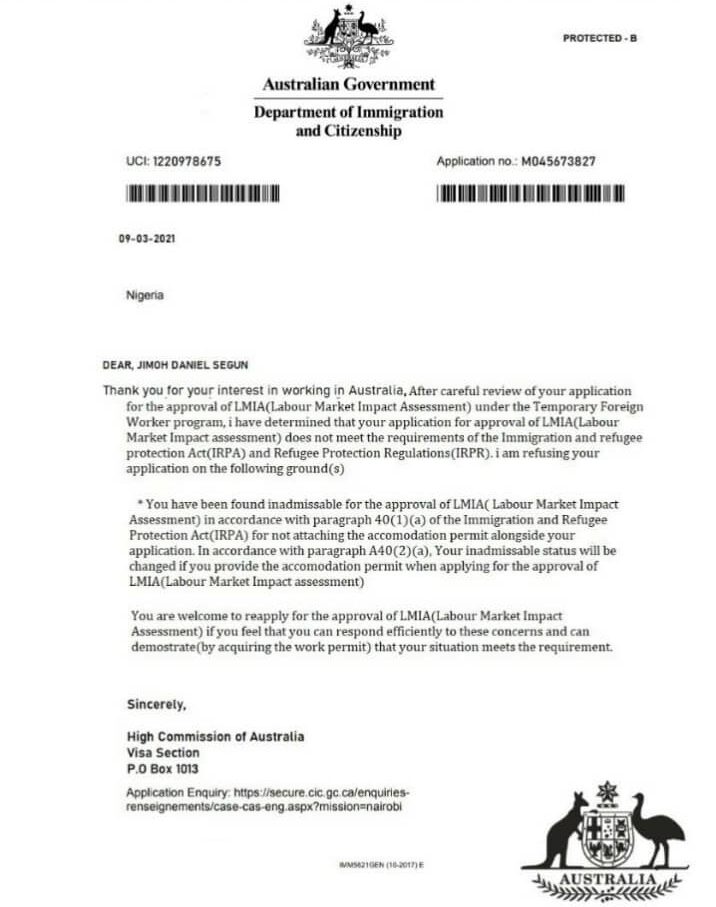 “It’s been a couple of weeks after I sent him my account details but I am yet to get a refund and he has stopped answering my calls and text,” Daniel added.

When BONews Service reached out to Mr. Johnson, he claimed that he doesn’t know Daniel Jimoh, adding that Daniel should report to the appropriate authority in his office.

Daniel’s case is currently getting worse and needs to seek urgent medical attention. He has also taken the decision to make a complaint at the police station for proper documentation of the case.

Daniel had reported the case to Zenith Bank, through which he paid Mr. Johnson. 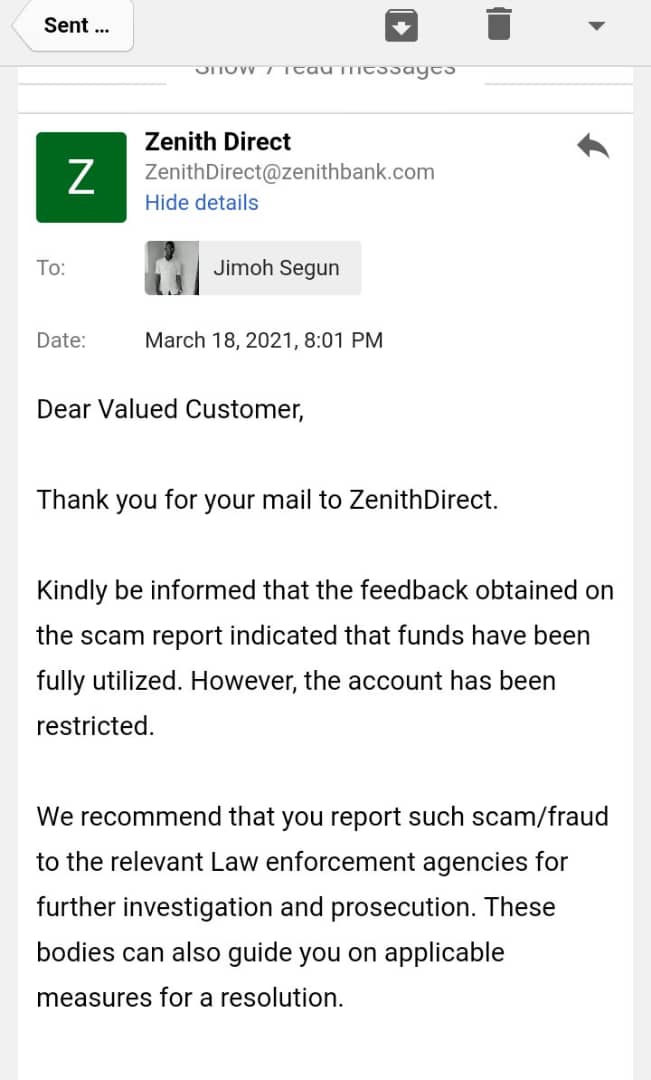