by BONews
in Human Rights, News
0

Image of a teacher beating students. SOurce - The African Exponent

A nongovernmental organisation (NGO), Centre for Children’s Health, Education, Orientation and Protection (CEE-HOPE) has called for the immediate abolishment of corporal punishment in schools nationwide.

This call is coming on the heels of the recent death of a 19-month-old baby, Obinna Adeze, in Delta State and alleged flogging of Cherish Ohamadike, a 2-year-old girl, by her teacher because she could not recite the alphabets properly, an action which left her sick and drew widespread outrage.

In a statement in Lagos, the founder and Executive Director of the child’s rights group, Betty Abah said that the need to end what she describes as a barbaric practice in school was long overdue. “Corporal punishment has no place in the 21st century. Either at home or in the school, there are better, more effective and nonviolent methods of correcting deviant behaviours in children.

“We totally condemn the recent occurrences where a teacher flogged a 17-month-old baby in Delta State brutally leading to his death at the weekend. Also, last week, a two-year old baby was lashed by a teacher, an action that went viral as the bold marks of the flogging on her back were shown across social media platforms.”

The statement went further: “This is the time to bring a total end to all forms of child abuse, torture and dehumanisation in our educational environments no matter the excuses or covers. Again, we reiterate; schools should be safe and conducive learning environments and not torture chambers.”

According to CEE-HOPE, both the Nigerian Child Rights Act of 2013 (CRA) and the United Nations’ Convention on the Rights of the Child (1989) forbids all forms of physical abuse and violence against every Nigerian child in every location and under any guise.

“We call on the Federal Government to follow in the steps of majority of countries in the world and ban corporal punishment in all schools across the country now. Though Lagos and Nassarawa States have policies against corporal punishment, they are largely unenforced. Indeed, one of the recent cases occurred in Lagos.”

While commending the Delta State Police Command for promptly arresting the suspects in the case of the baby flogged to death in in the state and relevant ministries in Lagos for stepping into the case, CEE-HOPE calls on the relevant authorities to as a matter of urgency prioritise the safety of children in schools in light of the recent occurrences.

It noted that not long, five-year old Hanifa Abubakar was brutally murdered by her school owner in Kano State while a 13-year-old boy, Nuhu Yahya, died at the Federal Government College, Kwali, in the Kuje Area Council of the Federal Capital Territory, Abuja after been allegedly hit by his class teacher for not answering questions properly in class. The case of late Sylvester Oromoni Junior who reportedly died in the hands of school bullies at Dowen College, Lagos is still very fresh as well as that of Keren-Happuch Akpagher of the Premiere Academy in Abuja.

It also called on all the state governments to enact the no-corporal punishment in all the schools in their States. In addition it urged relevant agencies to ensure tight regulation to ensure quality of scholarships, qualifications as well as emotional intelligence of teachers to prevent future occurrences.

The statement also urged Lagos and Nasarawa States where the law has been enacted, to ensure enforcement and full compliance from schools as well as punishment of violators.

“Children all over are dealing with tremendous pressures at home as a result of socioeconomic instabilities and they do not deserve add |ed pressure s not to mention physical torture from their schools,” said Abah.

“While other countries are investing in all sorts of supersonic computer age skills for their children to have competitive edge in a fast-moving world, we can afford to regress into a savage culture that extols hitting children with bamboo sticks, pestles and cowhide whip in the name of discipline, we cannot,” she added. 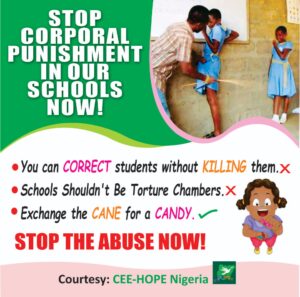