2023 And Women’s Emergence In Political Positions – The Journey Begins Now No ratings yet.

Finances. Fear. Party structures. These are the three main reasons why very few women managed to get elected into the Senate, House of Representatives and other levels of government in Nigeria during this year’s 2019 general elections.

These same reasons have been given by many female candidates who presented themselves for elective office across the country. And unless these issues are addressed, there is a likelihood that the gender gap in Nigerian politics will continue to widen.

“The reasons for the decline in representation of women in politics are—Finance, Fear and Party structure. As long as money politics is still the practice in Nigeria, many women will be disenfranchised further,” Bolanle Sarunmi Aluyi, who contested the Oyo State gubernatorial seat as a candidate of the National Interest Party, said.

Bolanle Sarunmi Aliyu first sought to run for office as the candidate for the Abundant Nigeria Renewal Party (ANRP). She said she had to defect to National Interest party because of irregularities perpetrated by the party leaders during the primary elections. The leaders ignored the party’s written principles and her supporters were not accredited to suit the candidate favoured by the party hierarchy.

In a letter to the party leaders to protest their interference in the nomination process, Aliyu said: “The written principles I believe ANRP was laid on did not playout at the primary election claimed to have been conducted on the 15th of September 2018 at Jogor Center, Ibadan Oyo State, Nigeria where more than 500 financial members and 8 other State Assembly Aspirants of the party who were my supporters were disenfranchised from the process hence I and my supporters boycotted the election at around 3 pm. It was clearly evident that the entire process was flawed.”

She explained how the state executives had been supporting one candidate adding, “I have previously expressed my dissatisfaction on several occasions with the biased attitude and actions of most of the Oyo State Executives, some still demonstrated these even at the venue of the Primary Elections where some State Excos’ who were part of the accreditation process wore branded T-Shirts of Mr. Ayorinde (the second gubernatorial aspirant), his Badges and some [were] even seen canvassing my supporters secretly outside the venue to switch sides with promised monies. Despite some actions of members of the National Electoral College present to correct some of these bias demonstrated, it was rather too late.

“My intention was clear from inception to having a healthy competition but I faced challenges and even at that, I stood resolute and promoted ANRP on every available media, gatherings and event across Oyo State and the country as a whole. After due consultation with my God, my family, my team and supporters, I Bolanle Ashabi Sarumi Aliyu “BASA”, hereby tender my resignation from the Abundant Nigeria Renewal Party ANRP while I take time to ponder my future. I am greatly saddened by this because I feel cheated but like I always say to my supporters, ‘It is only God Almighty that can give and take power’.”

After Aliyu resigned from ANRP, she joined National Interest Party where she emerged as the party’s gubernatorial candidate. Not many women would have proceeded in their quest, some would have been frustrated by the irregularities and partisanship so openly displayed by the party leadership.

Despite the huge number of female candidates who contested the various elective positions, no woman candidate emerged victorious in the 29 states where gubernatorial elections were held. Among 469 members of the National Assembly, only 18 women were elected to the National Assembly elections. Women senators elected were only 7 out of the 109 seats and only 11 women managed to get elected to the 360-member House of Representatives. 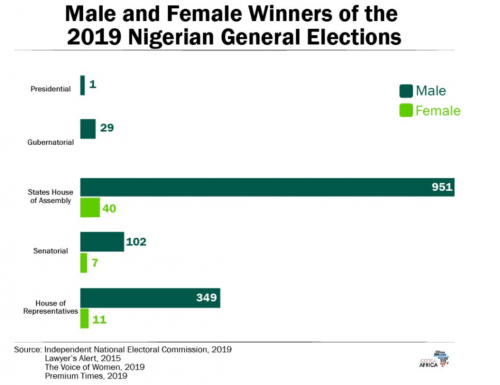 The disparity continues at the cabinet-level where only seven (7) out of a Cabinet of 43 are women while the rest are men. This is despite the high expectations raised by President Buhari who during the electioneering campaigns promised to implement the 35% affirmative action policy for women.

According to the World Bank report in 2016, women constitute 49.34% of the Nigeria population, which is almost half of the population. However, this does not reflect in the number of women who have been elected or appointed into political positions.

Mufuliat Fijabi, Executive Director Nigerian Women Trust Fund (NTWF), speaking during a strategy meeting held for female politicians to share their experiences during the 2019 general elections, said the low number of women presenting themselves for elective politics was “alarming and disturbing because it hampers women from contributing their quota to the development of the country”.

Fijabi added, “Currently Nigeria is at the lowest level in terms of countries with a good percentage of women in governance. It ranks 139 on the Global Gender Gap report out of 149, far lower than most countries in Africa. The governance that doesn’t make it easy through different structural barriers, electoral violence, and voter inducement, makes it difficult for women to win elections and also automatically excludes women from the governance process.

“I hope that the entire process will be put under the spotlight. The fact that women are not very represented in Nigeria’s governing process, whether as appointed representatives or elective representatives, means something needs to be done.”

Research has shown that women in elective positions are hardworking and firm in their decision, and this is a major reason women should be involved in politics.

The low number of women elected into office during the last elections is, however, a slight improvement over the past years. And compared to past elections, there were also more women candidates. In 2015, only
632 women contested for various positions ranging from Presidential, National Assembly and States Houses of Assembly seats. There was a slight improvement during this year’s elections as 853 women, excluding those who ran for the State Assemblies. Internal party politics, finance and the patriarchal nature of the Nigeria politics have continued to be the major determinants of those who emerge into political leadership positions. 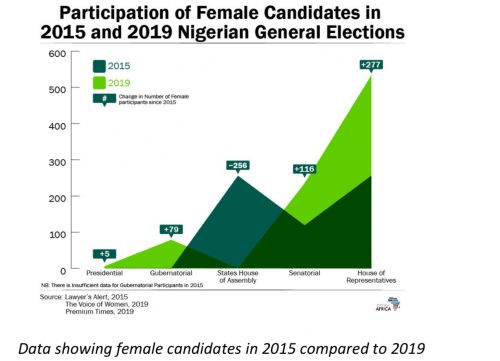 Abiodun Essiet, an aspiring councillor for the Ozoro Ward lost her All Progressives Party nomination during the primaries through irregularities which included manipulation of the results to suit a preferred candidate.

Essiet pointed out that internal party ‘democracy’ was the main reason for failing to get the nomination.

“First, the election was supposed to be declared null and void but the returning officer declared it inconclusive to give the electoral committee some power to decide on the election. Secondly, our party’s elections guidelines state that when a vote counted is more than the number of delegates present, such an election should be declared null and void and another election should be conducted. But the electoral committee supervising my council election decided not to do a repeat election but used their veto power to select a candidate for the ward.

“Thirdly, the decision of the electoral committee was influenced by money, ‘godfatherism’, gender, ethnicity, and religion. Finally, the party leaders were concerned about winning the general elections and wanted to anoint the candidate who suited their own criteria rather than the candidate who would deliver the dividends of democracy to the community,” she explained.

No Money, No Votes

For Zainab Umar, who unsuccessfully ran for the Kumbotso Constituency of the Kano State Assembly, lack of money was and is still a huge stumbling block for her and other women who run for elective positions.

“Women candidates do not have the financial muscle like the men. During the last elections, there were also incidents of violence across the country. Violence or violent confrontations during campaigns prevents many women from seeking election,” she says.

Lack of access to campaign funds is a huge stumbling block in a country that has a huge gender pay gap. The Global Gender Gap report 2018 has ranked Nigeria at 133 out of 149 globally with the gap between men and women in all aspects of society being far below the global average.

Meaning that women may not have access to financial systems that would allow them to run effective campaigns, and alternative means of achieving their goals must be sought.

Phina Kanu, a candidate for the Umuahia South Constituency in the Abia State House of Assembly while speaking during a strategy meeting for female politicians to relieve their experiences during the 2019 general elections which were organized by the National Women Trust Fund, NTWF, explained her ordeal during the electioneering campaign.

“At some point during this last election, I became highly discouraged because threats were coming from everywhere. Violence was everywhere, I was intimidated. We had to run to hide because our rival candidate felt he was more powerful and this discouraged a lot of my supporters,” Kanu noted.

For many women candidates, the threat of violence, to themselves or families, intimidation and sometimes, outright attacks, gives them no alternative but to opt out of the race for political office.

With less than four years to go before the next general elections, it is not too early to begin to take measures to help increase the number of women aspirants and ensure their success in elective politics. These measures range from ramping up the ongoing efforts to open up the space for women’s participation in politics and decision-making being conducted by groups such as Women Advocates and Research Documentation Centre, WARD C; Nigerian Women Trust Fund, NTWF; Women Radio, Women in Politics Forum amongst others, which focus on skills training to robust campaigns to push for the enactment of laws that will compel political parties to ensure they observe gender quotas in their nominations.

Giving recommendations on what to be done to increase women participation in elective politics, a disability-inclusion expert and development practitioner, Dr. Bukola Adebayo urged women candidates to “take extraordinary measures” to try and change the patriarchal nature of the Nigerian politics.

“Women should try as much as possible to engage in pre-election mobilization, marginalized and vulnerable groups including women, people living with disabilities and the youth should start engaging with their
communities before the election.

“Mobilization doesn’t stop with meetings but identifying with the people’s problems and providing leadership to find solutions to these problems. The electorate should not perceive that you’re only interested in their votes. Once they see your capacity before the elections, they gain confidence in you and when you’re running for office, they can easily vote for you,” Adebayo explains.

Adebayo added that in a political setting that is largely driven by money which is also parochial, women need to take extraordinary actions to emerge as winners.

Akinwale Akinrinade called for the deliberate appointment of women into positions of leadership in the political parties but also other spheres of power. “Political power is not limited to elective but also appointive,” Akinrinade said, adding that the enactment of the Affirmative Action Bill would give the opportunity for more women to be involved in governance.

To build on the momentum created during the just-ended elections, there is an urgent need to change the narrative and actively remove the hurdles that contribute to the gender disparity in Nigeria’s politics Changing the power paradigm—perceptions and structures that reinforce power as only belonging to men— will not be easy. Appointing more women into office, reorganizing party structures to ensure that at least a third of party nominations are women, providing financial and skills support for women candidates is just a few steps to increase women’s participation in elective politics.

Having more women candidates taking up political positions will not only help in advancing gender equality but will influence the kind of policies and solutions to problems that impact the whole society.